The memory of a country

The birth of a nation. From the 8th to the 13th century

In 711, a Muslim army undertook the conquest of Visigothic Hispania. The Iberian Peninsula, now called Al-Andalus, became part of Islam. For four centuries, the lands of Balaguer, Lleida, Tarragona and Tortosa formed part of an economic and religious community extending as far east as India.

On the frontier between Al-Andalus and the Carolingian Empire and sheltered by the Pyrenees, the Catalan counties were formed. From the 10th century onwards, under the hegemony of the House of Barcelona, the counties became independent of the power of the Frankish kings and, over the centuries, they gained political importance in the context of feudal Europe.

The conquest of New Catalonia, the link with Occitania, and dynastic union with Aragon consolidated the new State. The repopulation of land was largely organised by founding parishes and monasteries, which spread the art and sensitivity of the Romanesque movement throughout the region.

On the frontier with Al-Andalus

After the Arab-Berber conquest of 711, the Iberian Peninsula formed part of the Umayyad Caliphate based in Damascus. A new society was born within Islam, the result of a mixture of very diverse cultures: Al-Andalus. In 929, Abd al-Rahman III became independent of the authority of the Abbasid Caliphs, who ruled from Baghdad, and proclaimed Cordoba as the capital of a new Caliphate.

Al-Andalus became the leading cultural and economic power in the West and exercised considerable influence on the Christian kingdoms of the north. The legacy of Islam was crucial in configuring the future Catalonia as, for more than four centuries, the territories south of the Llobregat were fully part of Andalusian politics and culture.

Map of the expansion of Islam

Map of the expansion of Islam in the 7th, 8th and 9th centuries 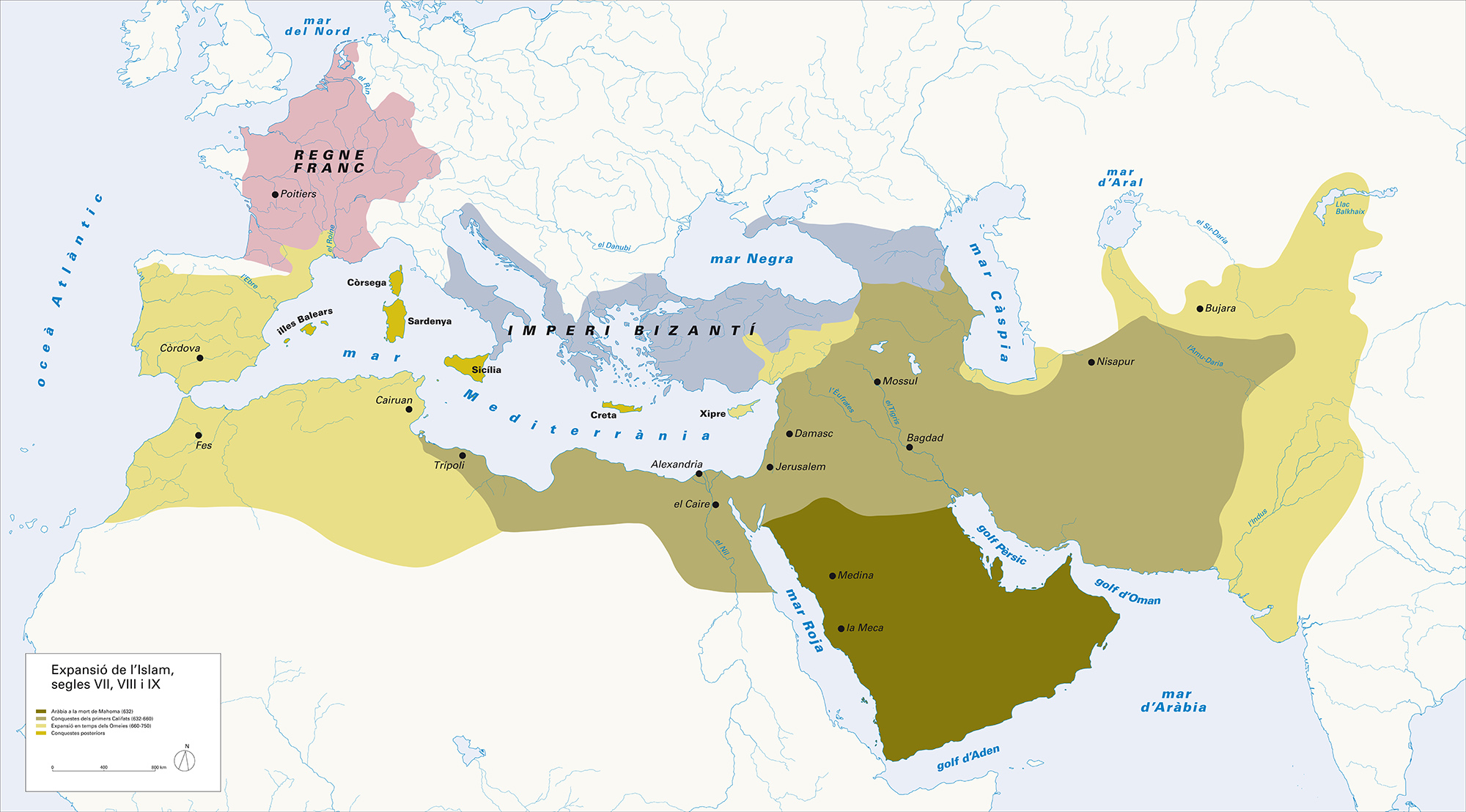 Map of the expansion of Islam in the 7th, 8th and 9th centuries 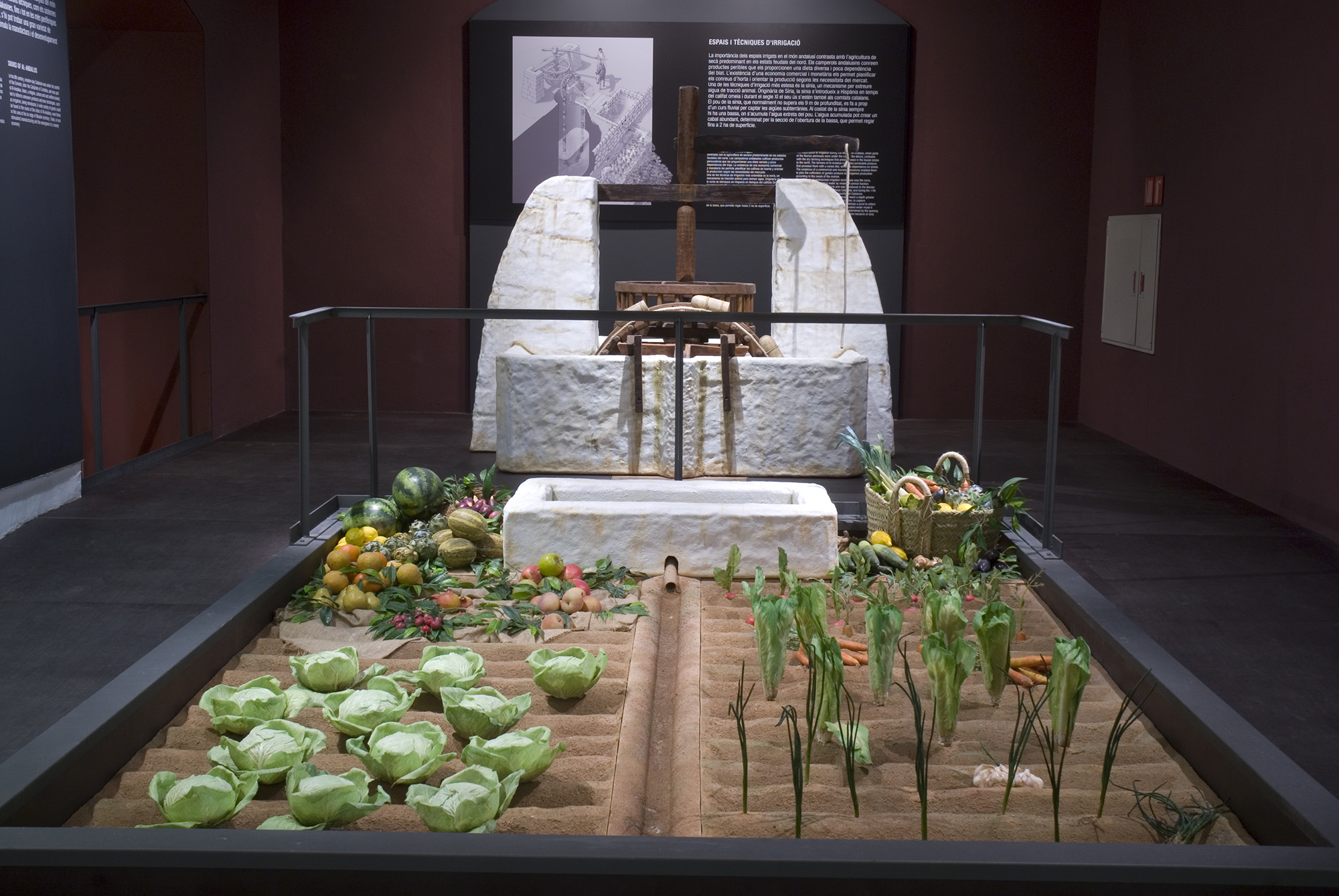 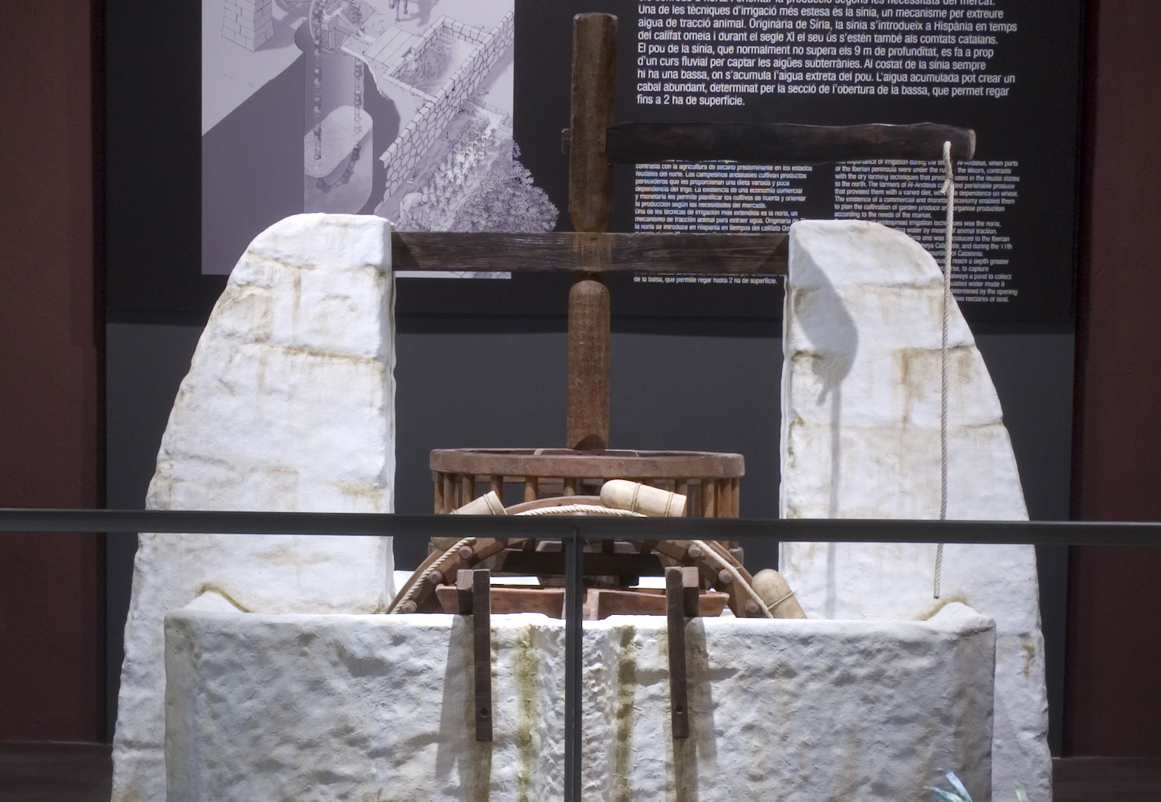 A noria is an ingenious mechanism making it possible to extract water from a well automatically and distribute it via channels to irrigate fields. Beasts of burden were used to begin the circuit and turn the wheel. 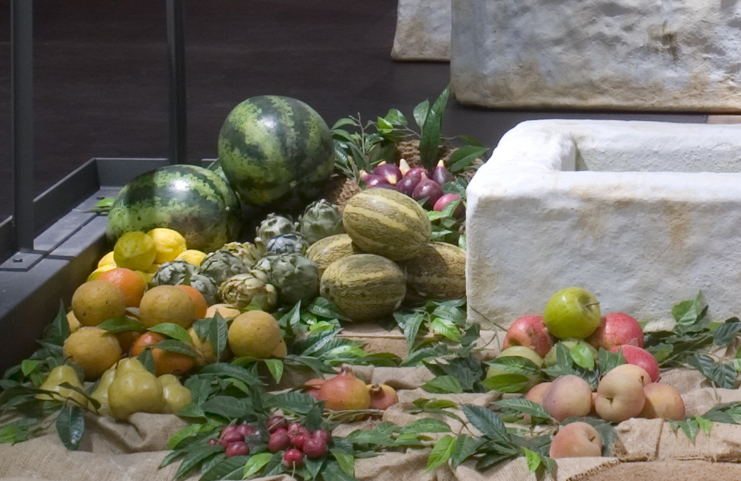 The noria came from Syria and its arrival in Europe via Al-Andalus in the 11th century allowed the introduction of new crops, such as fruit and vegetables, which we now consider essential for our diet. 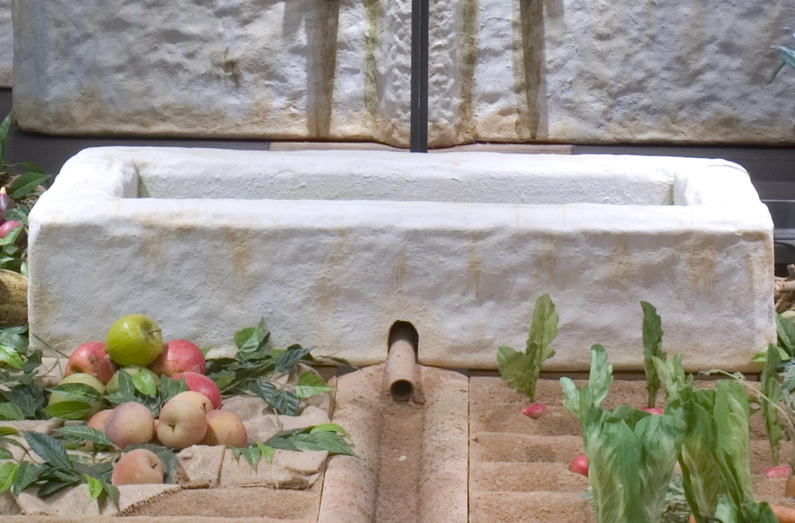 The noria well, which was not normally more than nine metres deep, was opened near a river to capture underground water. Beside the noria was a small basin where the water extracted from the well could be collected. The accumulated water could irrigate up to two hectares.

The frontier of Europe

The formation of the Carolingian Empire marked the move from Late Antiquity to Medieval Europe. Sheltered by the Pyrenees and at the gateway to the Islamic world, the future Catalonia began to be constructed. The Frankish rulers organised the frontier territories into districts ruled by counts, protecting what was known as the Marca Hispanica. As time went on, however, the power of the Franks over these territories weakened.

The young dynasties of Counts from local families often lacked feudal vassals. Wilfred the Hairy, Count of Cerdanya and Urgell, also governed the counties of Girona, Barcelona and Osona, accumulating the basic patrimony of the House of the Counts of Barcelona. At the end of the 10th century, the links with Frankish authority were finally broken and the way towards political independence was begun.

Handover of Girona to the franks

The inhabitants of Girona handed over the city to the Franks of their own free will. Shortly afterwards, the territories of Urgell, Cerdanya, Pallars and Ribagorça followed their example.

On Christmas Day 800, Charlemagne was crowned Emperor in Rome. Using the extensive domains he had inherited as a base, he expanded his empire into the territories of the Slavs, the Lombards, the Byzantines and the Muslims.

Louis the Pious, son of Charlemagne, and William of Gellone commanded the French army. Brought down by hunger, Barcelona capitulated on 3 April. Charlemagne granted its inhabitants an extensive charter of liberties.

Wilfred the hairy, count of Barcelona

Wilfred the Hairy, of the House of Carcassonne, became Count of Barcelona and Girona, as well as Urgell and Cerdanya. His sons, the first counts not appointed by the Frankish kings, began their own dynasty.

Despite the efforts of the counts, the Catalan territories suffered attacks by the Muslim leader Almanzor. In 985, he attacked and sacked Barcelona after defeating Borrell II at the battle of Rovirans.

Breach of the feudal relationship

After not receiving the aid he had requested to defend his territory, Borrell II decided not to renew his oath of loyalty to the Frankish king Hugh Capet, becoming de facto independent. From then on, the Catalan counts acted with full sovereignty in their dominions.

A land of hard work

In the 8th century, the Pyrenees were densely populated due to the flows of migration caused by the crisis of the Late Empire, the Germanic invasions and the Muslim conquest. When the Pyrenean valleys reached the maximum population they could support, large-scale emigration to the lowlands began.

The work of peasant families who settled in depopulated areas made the wasteland productive. This process is fundamental for understanding the conquest and colonisation of Old Catalonia. Over the years, however, feudalism was imposed throughout the region and small peasant freeholdings were reduced in favour of the dominions of the clergy and great feudal lords.

This reconstruction reproduces the conditions of a peasant family. 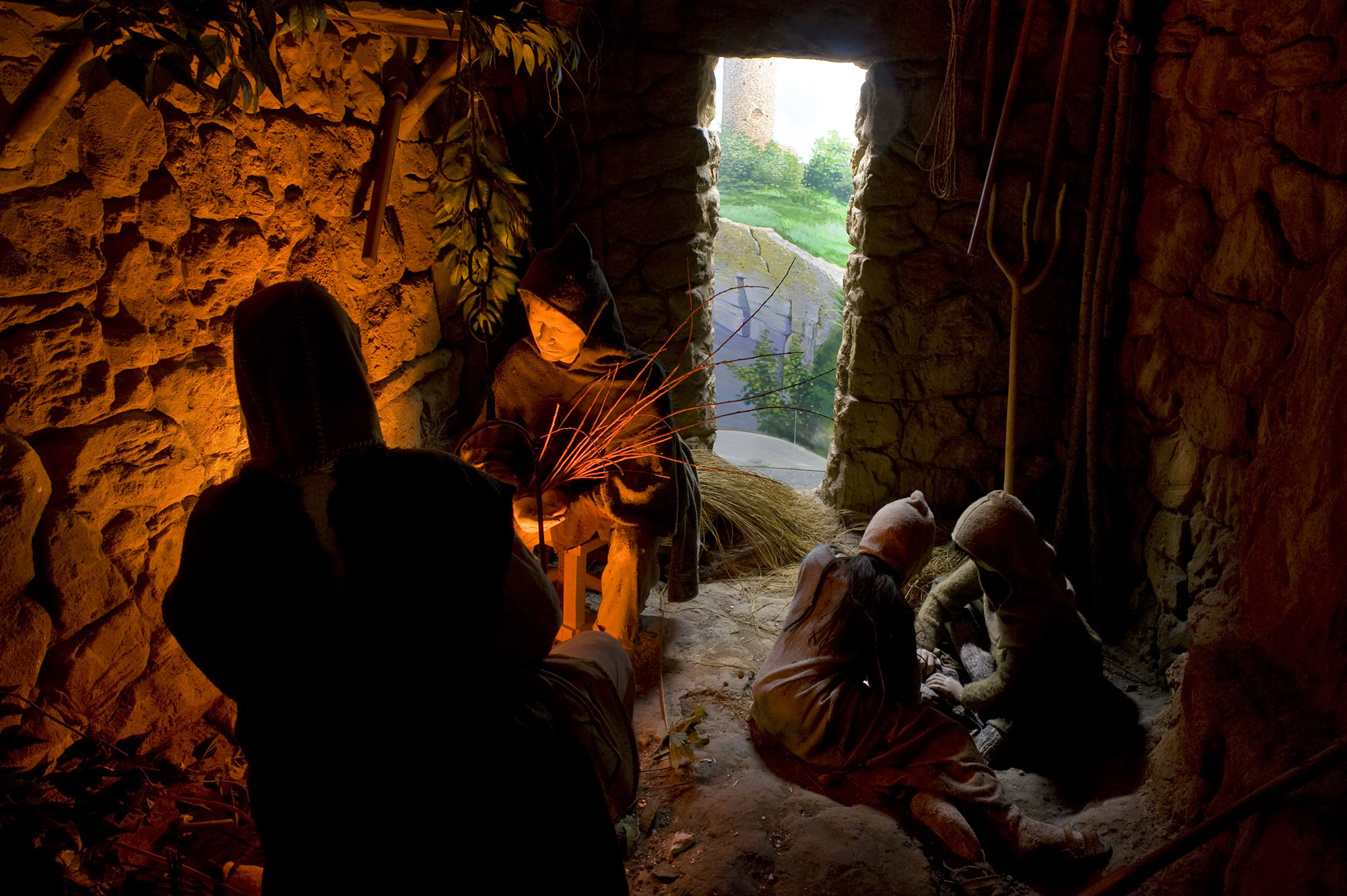 This reconstruction reproduces the conditions of a peasant family.

The strength of the knights

The Carolingian conquest of the Catalan territories and the establishment of the Marca Hispanica led to the formation of an unusual aristocracy, rooted in the region but often with interests running counter to those of the general population. This social class emerged from the combination of lineages of Pyrenean origin and members of the Hispano-Gothic nobility.

The members of the dominant estate spent most of their time at war, although they also carried out administrative and judicial functions in the districts they held in the name of the count, where they extracted their rents. In the 11th century they became the great beneficiaries of social changes and the establishment of feudalism.

A knight’s equipment was heavy and powerful. In all, his defensive and offensive arms usually weighed more than 30 kilos. Given his difficulties in walking or moving with any kind of agility, he needed to be firmly seated in his saddle to charge with all his weapons. 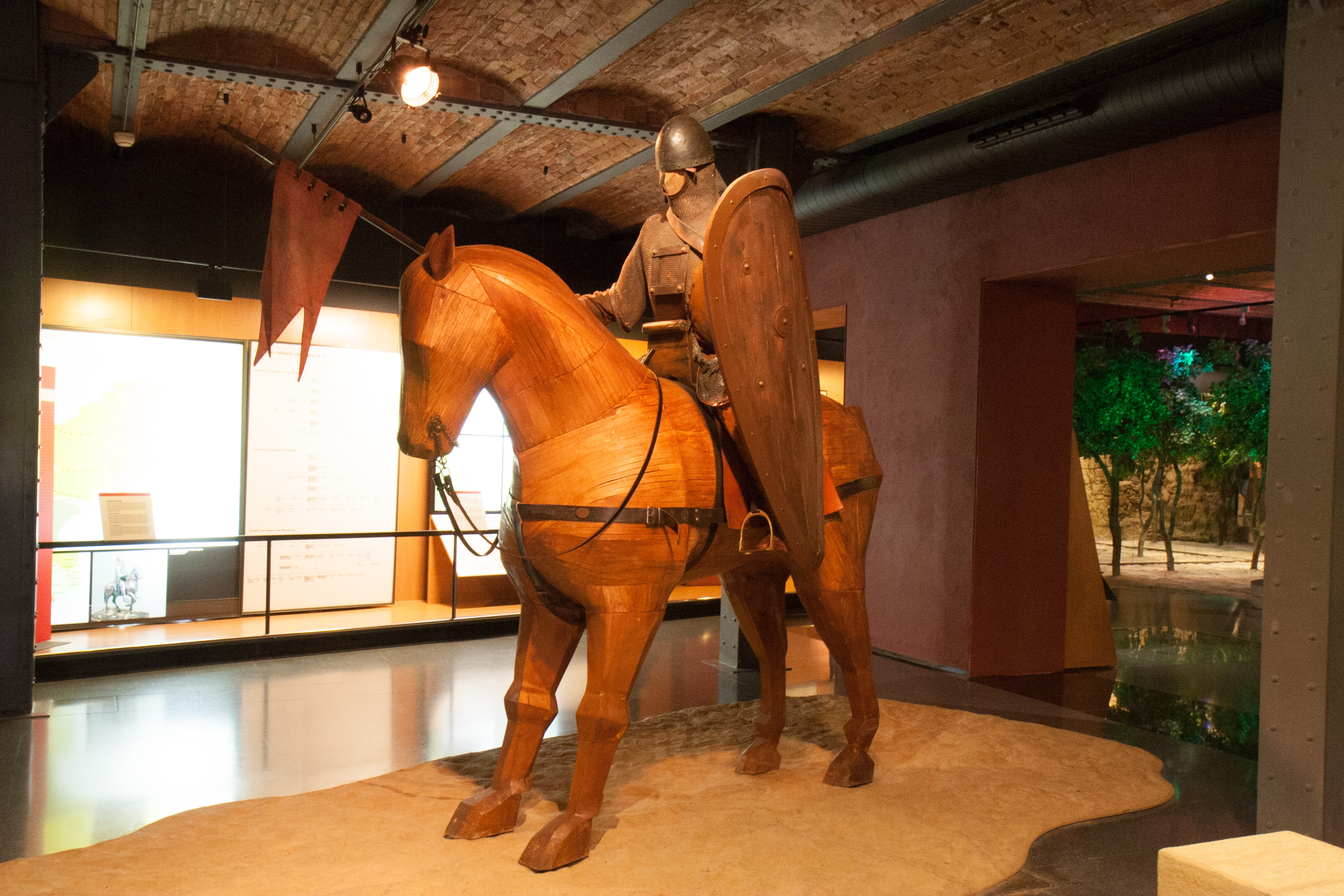 A knight’s equipment was heavy and powerful. In all, his defensive and offensive arms usually weighed more than 30 kilos. Given his difficulties in walking or moving with any kind of agility, he needed to be firmly seated in his saddle to charge with all his weapons.

The Church: structure and construction

The Church carried out intensive evangelisation work during the 8th, 9th and 10th centuries. The agricultural communities in the parish were its natural environment for relations with the people. Monasteries became centres for preserving and transmitting culture and knowledge of Antiquity, and they developed Romanesque art, which spread throughout the region.

The Church played a decisive role in maintaining law and order. To deal with feudal violence, the ecclesiastical hierarchy created legal instruments such as the institution of the Peace and the Truce of God, which established the suppression of feudal fighting during a truce period. This was promoted by Abbot Oliba and his work exemplified the Church’s function in structuring and constructing society. 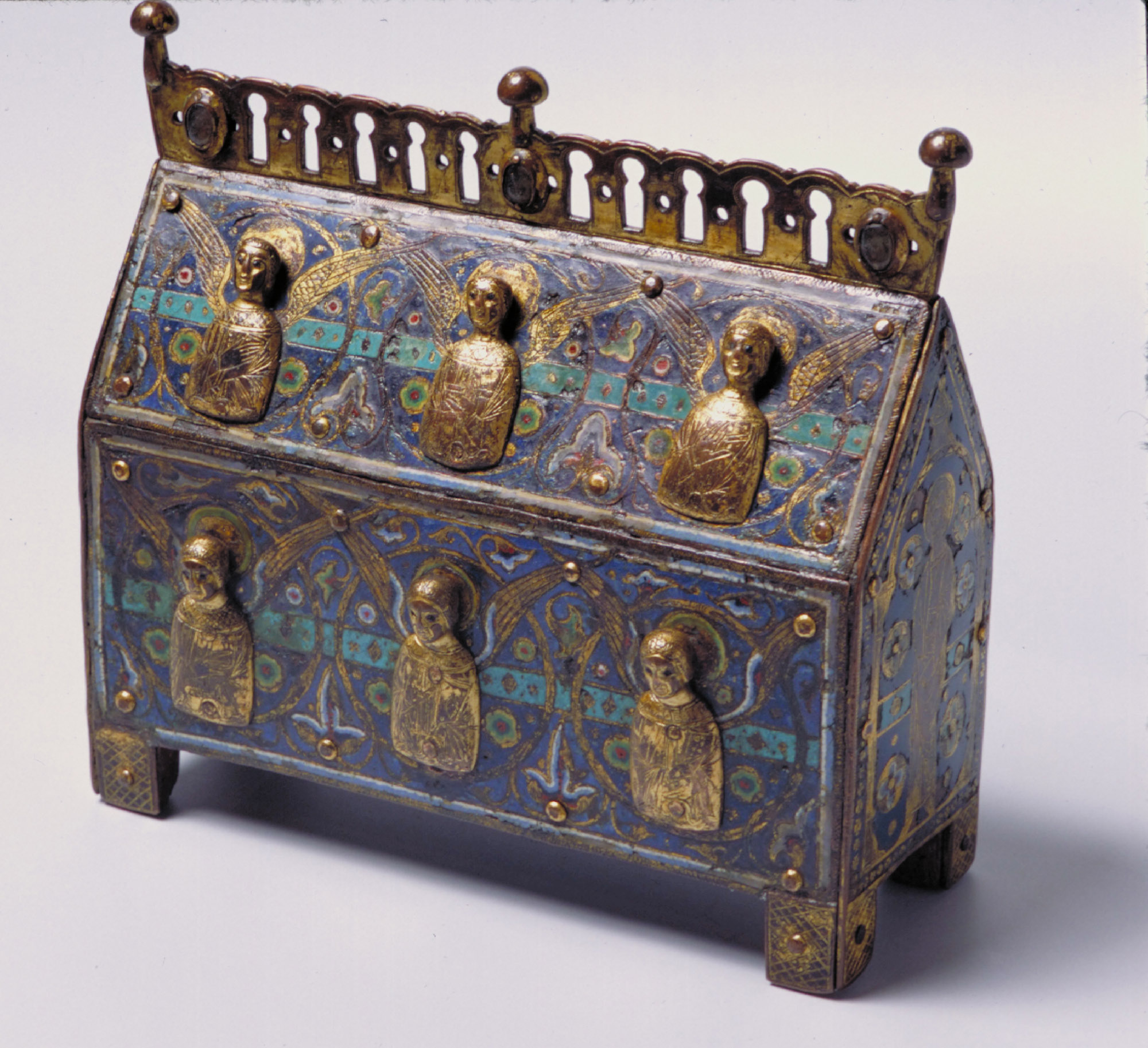 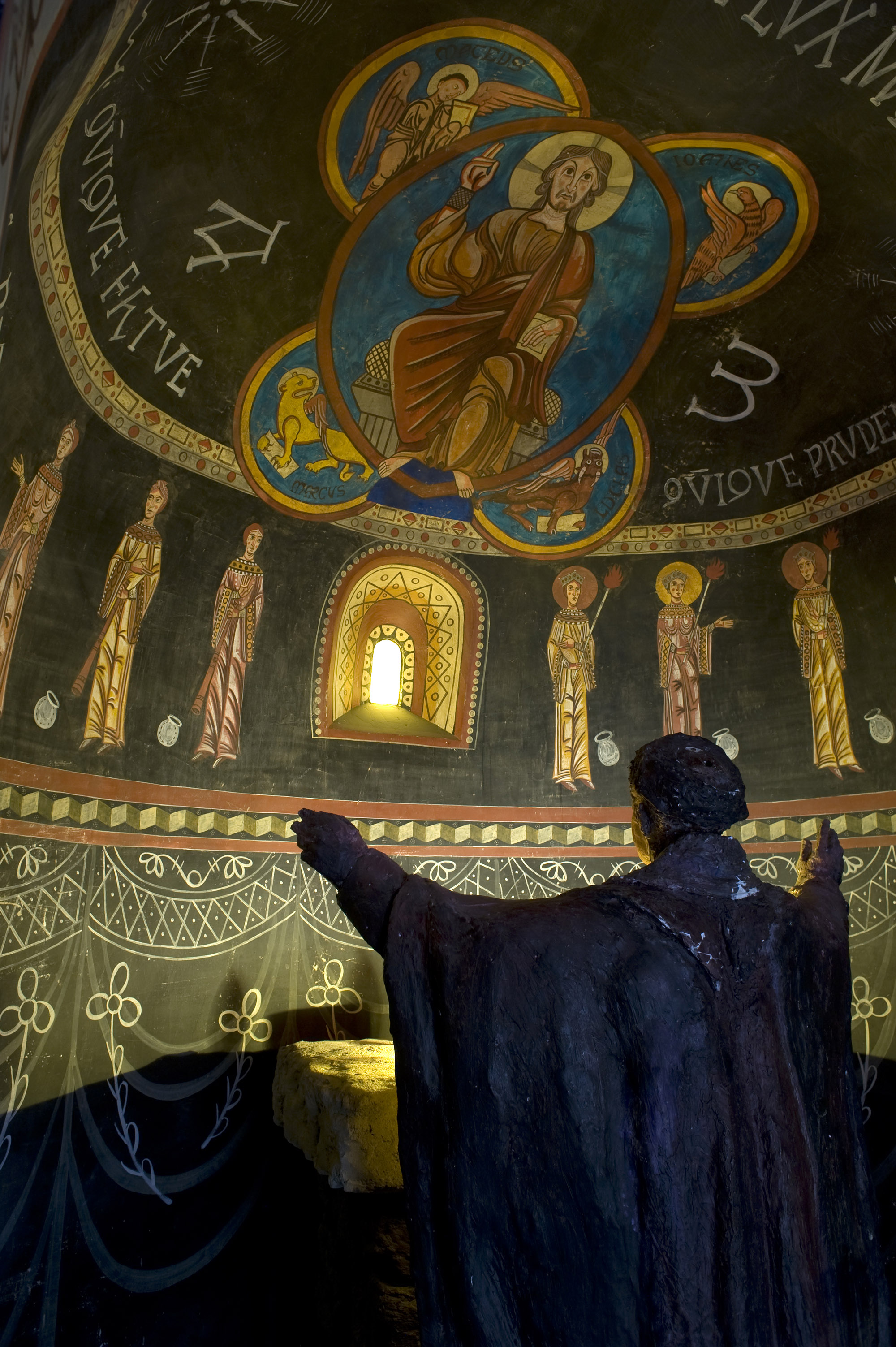 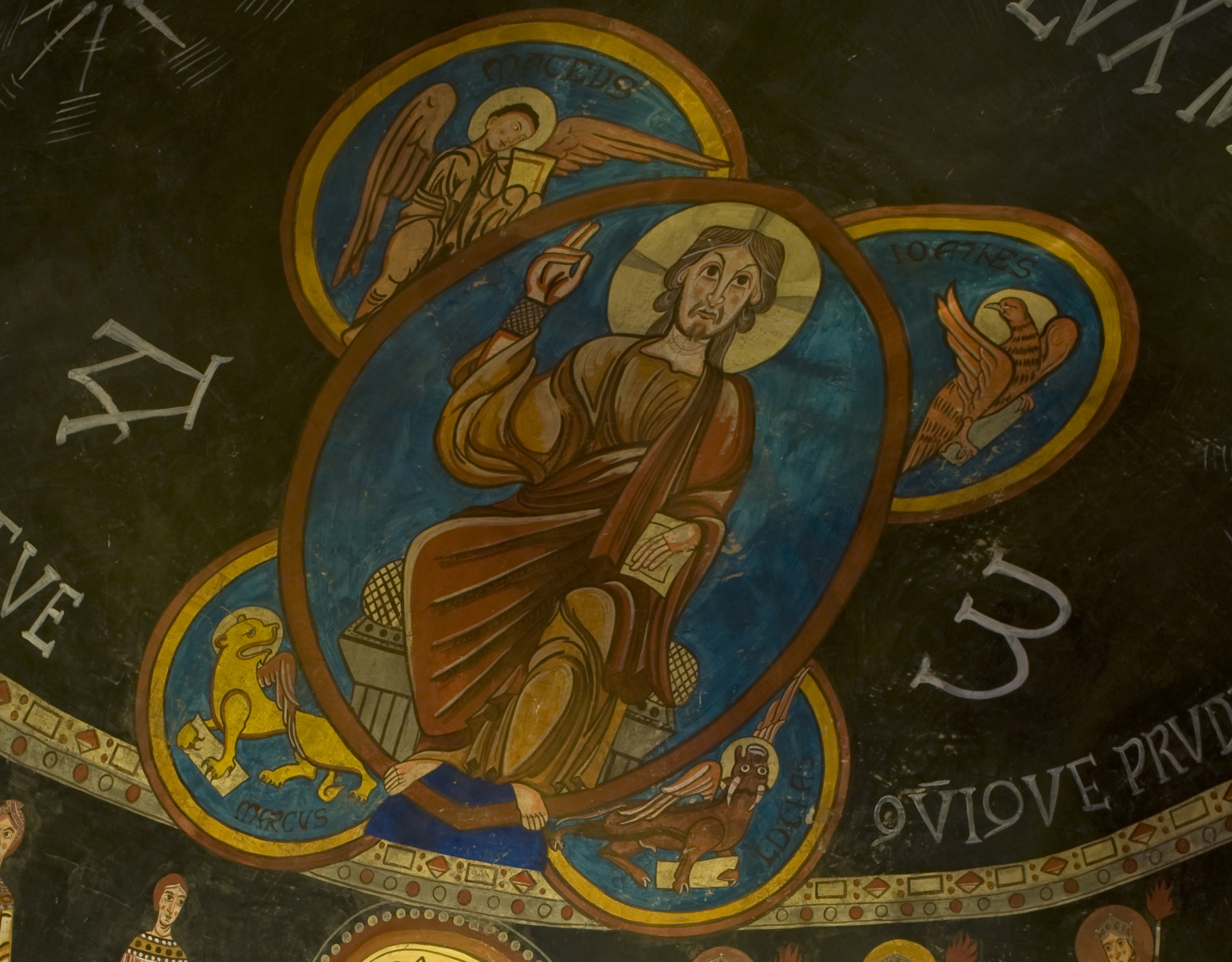 Everywhere, small churches were built in villages and hamlets, decorated with paintings proclaiming the majesty of God, the goodness of the saints and the torments of Hell. The scenes impressed the humble peasants and encouraged respect for and fear of God. This was the golden age of Romanesque art. 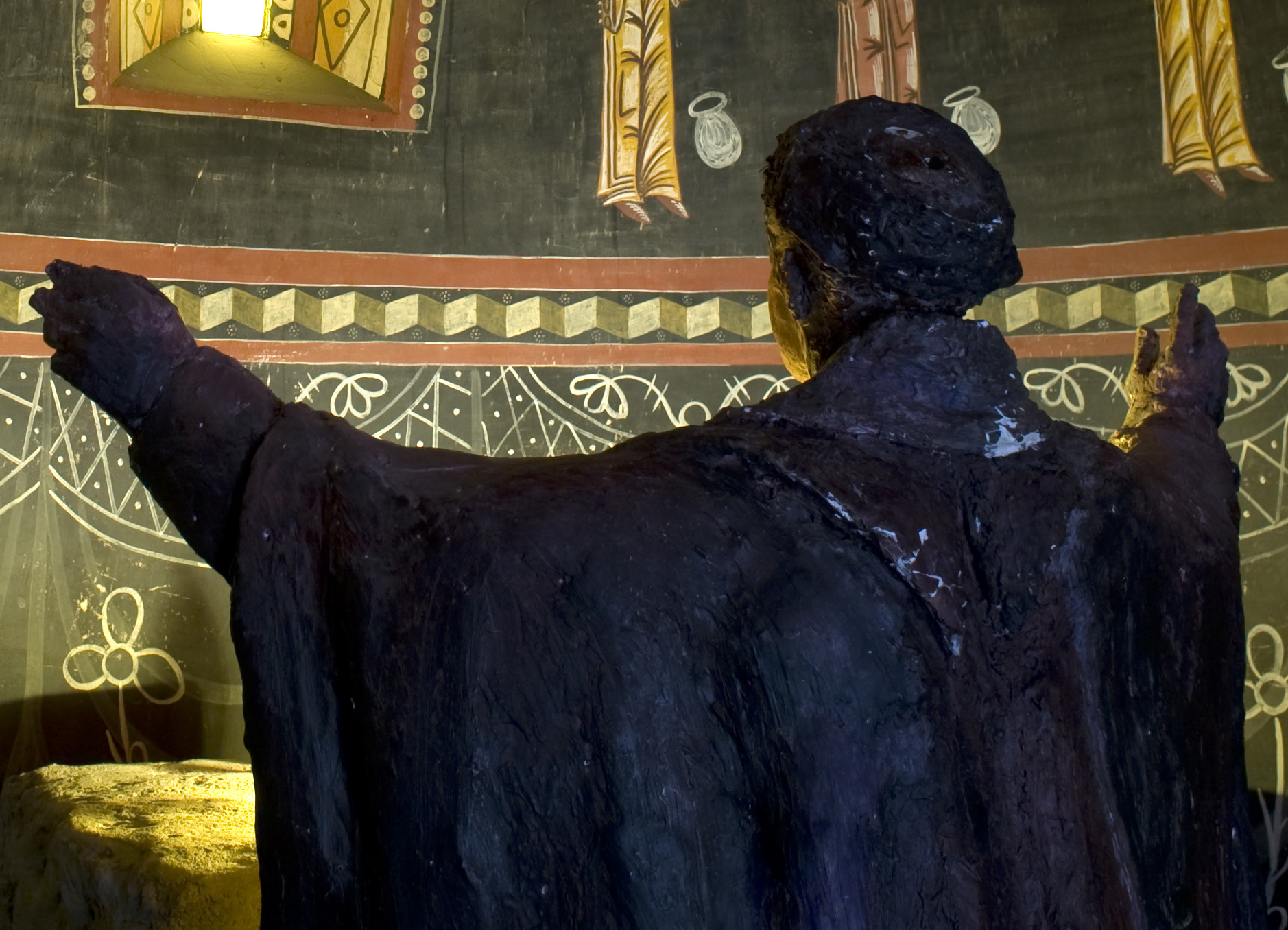 The clergy enjoyed great moral authority and social pre-eminence. They were often also landowners with vassals. Although they provided legitimacy for feudal authority, they also opposed the violence and excesses of the knights.

Some of the features characterising the Catalan identity were consolidated during the 12th century. The appearance of the choronym “Catalunya” (Catalonia) happened at almost the same time as the beginning of the use of Catalan as a written language. The “four bars” (red on a yellow background) of the pennant of the counts of Barcelona, now the national flag, have been used since the end of the 11th century.

The markedly agrarian feudal society was revitalised with the intensification of trade: new towns, markets and fairs appeared to structure the territory and great sea routes were established, opening the country up to trade. Barcelona, the capital, was the most populous urban centre and the political, economic and social centre of Catalonia.

The expansion of the Crown of Aragon

The Crown of Aragon began in 1137 as a result of the marriage between Ramon Berenguer IV of Barcelona and Petronilla of Aragon, daughter of King Ramiro II (the Monk). It became a military power that expanded into the Muslim lands. The conquest of New Catalonia generated a considerable flow of migration towards the south, where the religious and military orders had great influence.

The cultural and political links with Occitania marked the character of the Catalan-Aragonese monarchy. The troubadour culture, so characteristic of the period, had a strong presence at court. The expansion towards Occitania was cut short due to the French crusade against the Cathar heresy and the defeat of King Peter the Catholic at the Battle of Muret in 1213.

The marriage of Ramon Berenguer IV and Petronilla of Aragon, daughter of King Ramiro the Monk, dynastically united Catalonia and Aragon. Their son Alfonso the Chaste was the first monarch to govern with the titles King of Aragon and Count of Barcelona.

Catalano-Aragonese power expanded in various campaigns into what became known as New Catalonia. Between 1148 and 1149, Tortosa, Lleida, Fraga and Mequinenza were conquered. In another campaign, in 1153, the enclaves of Prades and Siurana were taken.

Faced with the expansionist threat of the Almohads, the various Christian kingdoms on the peninsula allied and defeated them at the battle of Las Navas de Tolosa. This battle marked the decline of Muslim hegemony on the peninsula.

As part of the crusade against the Cathar heresy, Simon de Montfort defeated King Peter the Catholic, who died in the battle. This confrontation marked the prelude to French rule over Occitania and the end of Catalan expansion in this region.

Our sea. From the 13th century to the 16th century

Our sea. From the 13th century to the 16th century